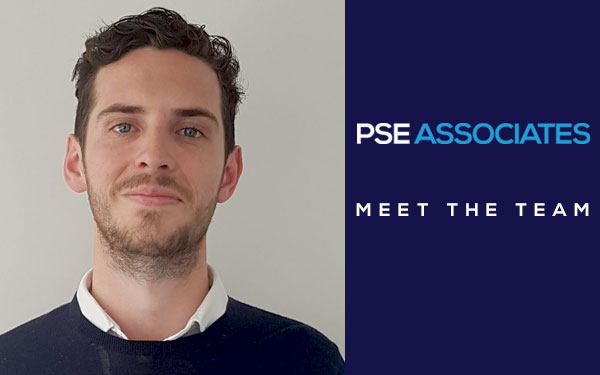 Maxwell Rhodes joined PSE Associates as a Quantity Surveyor in August 2018 but he pretty much ‘grew up’ with the firm, as he’s the son of Director Colin Rhodes, who co-founded PSE Associates nearly 30 years ago.

“Lots of the team have been here a fair amount of time and have known me practically all my life,” says Maxwell. “In addition, I worked here for a six month stretch previously, as well as during various summer breaks.”

That said, Maxwell didn’t join PSE Associates immediately after graduating from the University of Exeter, with a first class degree in Economics. Instead he went to work as a stockbroker in London.

“During that time, Colin and Paul very much kept the lines of communication open and it felt like the right time to be joining the business,” says Maxwell, who is currently part of the pub team, working primarily on projects involving Fuller Smith & Turner.

“After being in a desk job, it’s really refreshing to go out on site and get involved with the projects,” says Maxwell.

“Every Fuller Smith & Turner location is unique and, recently, we’ve worked on projects ranging from historic pub refurbishments through to shell fit-outs, all with their own characters”

Recent projects which Maxwell has been involved with, as part of the Fuller Smith & Turner team, include The Hercules in Lambeth, London, which can trace its roots as a pub back to 1805. During the refurbishment, the team provided both Quantity Surveying and Project Coordination support. The pub takes its name from the circus strongman, Hercules, and the interior design has a circus theme.
“I am really enjoying the varied nature of my job and I’m learning a lot from the other team members,” says Maxwell. “It’s great to see a project through from conception to a finished product.”

Maxwell’s degree in Economics is proving useful in terms of the dealing with the numbers involved in Quantity Surveying, while he is planning to embark on a distance learning RICS approved MBA in Construction and Real Estate later in the year to enable him to achieve his ultimate aim of becoming a chartered surveyor.
Maxwell says that PSE Associates is a friendly place to work, but adds it is somewhere he’s known ‘all his life’.

“I am enjoying being part of PSE Associates and am looking forward to seeing the business continue to thrive and expand,” he says.

In this spare time, Maxwell enjoys socialising with friends and splits his home life between Brighton and London.
Maxwell used to play a fair amount of hockey, is a keen skier and likes to do as much travelling as he can and is clocking up a fair number of city breaks. Recently these have included Marrakesh and Lisbon, with trips to Paris and Spain on the agenda – should his busy work and social life allow!