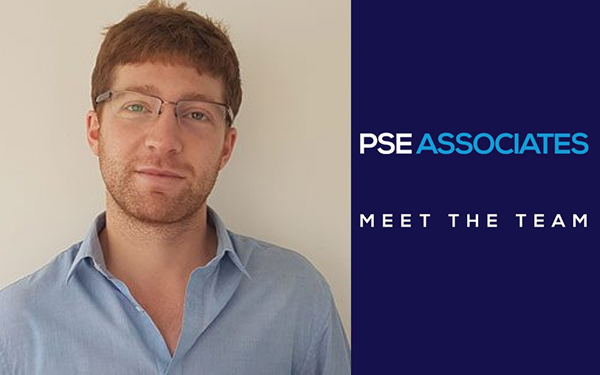 Quantity surveyor Joel Cohen has been with PSE Associates for more than three years, primarily working in the restaurants team and with some pub clients as well.

“My role is mainly at the beginning of a project, producing estimates and scheduling the works,” he says.

While Joel doesn’t have too much involvement with managing projects moving forward, he enjoys hearing about their progress from his colleagues and seeing photos of completed work.

Among the recent projects he’s worked on is the Kricket restaurant at the newly-refurbished Television Centre in London’s White City. This is Kricket’s largest restaurant to date and brings the group’s inspired Indian cuisine to West London. The space features an open kitchen, booth seating and a garden terrace with views of the studios

“I really enjoy working on restaurant and bars – they are exciting, fast paced projects to be involved with,” he says.

“I was focused on construction during my degree and wanted to do something in that area,” he explains. “Having said that, although my degree is in Civil Engineering, Quantity Surveying is a slightly different discipline but I really enjoy it.”

Joel comes from Cheltenham but, having studied in Brighton and loving the city, he wanted to stay after graduating.

“Brighton is such a cool place and I wanted to work in the centre,” he says. “So, I must admit that the office location was one of the factors that made a decision to join PSE Associates an easy one.”

When he’s not at work, Joel likes to get out socialising, as well as running and swimming in the sea. He’s recently signed-up to do the Brighton half-marathon and says that, having completed a full marathon in the past, he prefers to run a shorter distance, but at a faster pace.