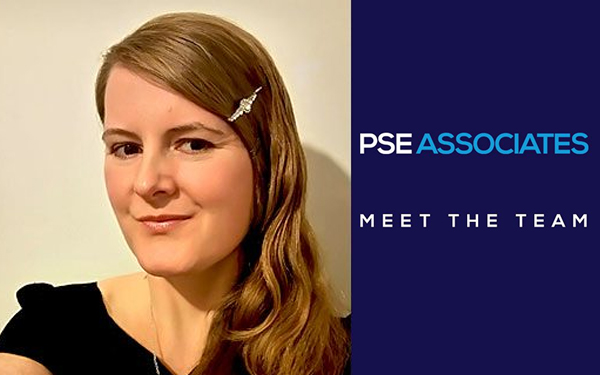 Sarah is one of PSE Associates’ longest-serving members of staff, having been with us for 21 years now. She’s part of our admin team, but her role is wider than just that – as she gets involved with a variety of different aspects concerning our projects.

“The admin team here deals with everything that the team onsite can’t,” Sarah says. “That ranges from ordering and invoicing to making sure that goods turn up on time.”

When Sarah joined PSE Associates, she was employee number eight and came onboard straight after finishing university. At that time, the firm was based in Brighton’s Ship Street.

“My family home was in Chichester but I wanted to start my working life somewhere bigger,” Sarah remembers. “I had a friend in London and another in Brighton who both suggested I move near them. I opted for Brighton, as I already knew it well and liked it.”

Sarah enrolled with an employment agency and the second interview they sent her to was with PSE Associates.

“I had studied English literature and law at university, although I dropped law after a while and majored in English,” she says. “To be honest, I didn’t have a clue what I wanted to do career-wise.” Sarah says she loves the variety of her role.

“Every project is different,” she says. “It’s great to see the whole thing evolve from an idea to reality.”

Sarah says she enjoys being part of the PSE Associates team.

“There’s a friendly bunch of people here and we get on well,” she says. “While I’ve been in my role a long time, that’s not unusual here. I’d say half the team has been here for at least ten years. It’s that sort of place. We feel appreciated and I’ve seen a number of people leave, who have eventually returned to us.”

Sarah still lives in the centre of Brighton and says that, although it’s changed and seems more like a big city than it did when she moved here, she still loves it.

When she’s not at work, Sarah and her husband enjoy cycling and going on long walks. She’s also got into making her own clothes.

Brighton is also the ideal location for fulfilling the couple’s passion for cinema.

“We try to see a film at least once a week,” she explains. “People assume that we’d soon run out of things to see, but Brighton offers such a variety of independent and foreign films, as well as the blockbusters – so there’s always something to watch.”